A History of Chocolate and Recipes!!!!

Cocoa, or chocolate, is arguably one of the most treasured foods in the world. In the eighteenth century a Swedish naturalist named Linnaeus gave the cacao tree its latin binomial, Theobroma cacao, which means “food of the gods”.

Today, the beans of the cacao tree have acquired immense importance socially, economically, and gastronomically.

Since its currently known inception in 1900 BC, chocolate has made quite the journey and transformation. The Aztecs believed the cocoa bean to hold magical powers and was revered as a gift from the God of Wisdom, Quetzalcoatl. They were so highly valued that they were used as a form of currency. According to an ancient Aztec document,“One bean could be traded for a tamale, while 100 beans could purchase a good turkey hen.” What I wouldn’t give to trade a cocoa bean for a tamale right now! By some accounts, the 16th century emperor Montezuma drank three gallons of chocolate a day. Tamales? Three gallons of chocolate a day? It’s enough to make me quit my day job and apply for Emperor. I think I saw an opening on Indeed.com.

It’s important to note that chocolate in the 18th century was a bit different from what you and I are used to. 3,000 year old chocolate was rougher around the edges and was primarily consumed as a bitter beverage. It is said that Christopher Columbus attempted to bring back cocoa preparations to Spain but the Spaniards denounced it as the “drink of the pigs”. It wasn’t until Hernando Cortes brought cocoa back in 1519 and they added honey to it that it became all the rage.

Chocolate remained something of an aristocratic nectar until a Dutch chemist by the name of Coenraad Johannes Van Houten invented the cocoa press which worked by squeezing the fatty cocoa butter from the roasted beans, leaving behind a very fine powder which was then mixed with other liquids and sugar to make delectable and easy to digest chocolate bars. This also made production easier and thus more affordable for us common folks.

Now as a reward for making it though my nerdy wordsmithing on the nowhere near exhaustive history of chocolate, you get not one but TWO absolutely divine chocolate recipes. Remember that liquid truffle recipe I promised you in my cover of the French Broad Chocolate Lounge? Well, it’s finally here.

I also have for you, in lieu of all this fun Aztec babble, a cayenne spiced flourless chocolate torte recipe that I like to call, “Master Montezuma”…..because I’m cornball like that. 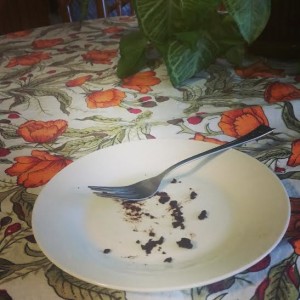 Written and eaten by Kate Randall